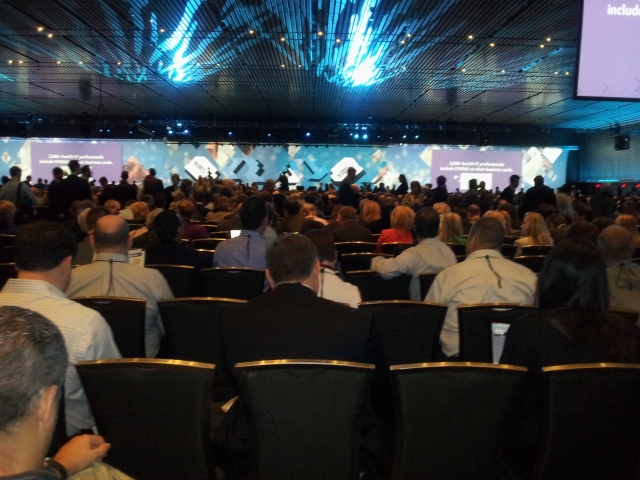 Over the past 3 days I have been actively following the Stanford Medicine X conference (#MedX) through Twitter and via the live feed of the plenary sessions. I have never been to #MedX (I’m hoping to go next year) but from what I have seen and from what many others have said – this conference sets the standard when it comes to (a) patient involvement, (b) taking care of attendee needs and (c) meaningful presentations. 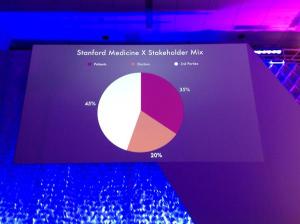 In just a few years, Larry Chu (@LarryChu), has established #MedX as THE CONFERENCE to attend for patient advocates, researchers, physicians, nurses, IT folks and of course, for patients themselves. In fact, this year’s event had the highest ratio of patient participants: 35% (picture from Janet Freeman-Daily).

At #MedX, patients are not just passive participants. Patients, REAL patients, make up a significant portion of the presentations and workshops. Their stories and their passion helps to make #MedX such a memorable and educational event (that plus the way that the conference organizers apparently think of every attendee’s need – blankets, a wellness room, hand sanitizers).

Sadly, this level of patient involvement in healthcare conferences remains the exception rather than the rule. In fact, this lack of patient participation spurred Lucient Engelen (@lucienengelen) to launch the “Patients Included” designation for conferences. Engelen had grown tired of attending conferences that “happen without the people they are all about – patients” and vowed not to attend if patients were not part of the audience or were not involved in the program itself. You can read more about this designation on the BMJ Blog and on Engelen’s blog. [Side note, there are a growing number of conferences with this designation including Doctors 2.0]

I agree with Engelen. There is no doubt in my mind that involving patients in healthcare conferences is valuable. There is no substitute for the emotional and intellectual impact that patient stories can have on an audience. You cannot hear the journeys of ePatients like Regina Holliday, Dave deBronkart or Morgan Gleason without experiencing a “punch to the gut” (a good thing). I think Ted Eytan said it best in his blog post following the 2012 Permanente Executive Leadership Summit where patients were part of the agenda:

This year, for the first time, we invited 4 Kaiser Permanente members and their families to join the meeting…One colleague of mine said it was the first time he’s cried at this meeting.

Leslie Kernisan (@GeriTechBlog) had similar things to say in her blog following her first #MedX experience in 2013:

I was surprised by how powerful it was to have patients on stage telling their stories…I found myself feeling more empathetic, and focused on the patient and family perspective. And I felt more inspired to do better as a physician and as a healthcare problem-solver. In short, having patients tell their stories helped me engage with the conference presentations in a more attentive and meaningful way.

I think we can all agree that having patients at healthcare conferences is a “good thing”. But now the question becomes – How. How do conference organizers attract patient attendees? How do they get patients as speakers? What do they have to do different to accommodate the needs of patients? Is there another form of conference (other than an actual physical conference) that would work better for patients?

Regina Holliday wrote an excellent post with several suggestions for conference organizers looking to attract patients. She had 6 recommendations:

Susannah Fox, formerly of Pew Internet Research now Entrepreneur in Residence at the Robert Wood Johnson Foundation, also made suggestions on her blog:

For me, there are two big barriers to patient involvement at conferences. First and foremost is the cost associated with attending. Flights, hotels and conference attendance fees can add up to well over $2,000. That’s a lot to ask of anyone let alone a patient who has to focus on their health on a daily basis. The second barrier is logistics. Not many conferences (save #MedX) have areas where patients can rest or get the care they need. In fact travelling to a different city may not even be possible for many patients because of their condition or because they would not have access to medical care where the conference is being held.

I’m hoping that the #hcldr community can come with some ideas to address these barriers.

Join #hcldr Tuesday September 9th 2014 at 8:30pm Eastern Time (for your local time click here) for the weekly #hcldr tweetchat where we will be discussing:

Special Note: Thank you to all the Tweeters who attended #MedX for live-tweeting the event. For those of us unable to attend, it was only through your fast fingers that we were able to remotely participate in many of the workshops and break-out sessions. Those that know me know that I like to take pictures at conferences. Since I wasn’t at #MedX I captured as many photos from the army of Tweeters as I could. Links below.

← Online Is Just Courtship…
Jumping Into The Future: How Can We Accelerate Technology Adoption in Healthcare? →