September 10, 2019 · by Joe Babaian · in Healthcare Leadership · Leave a comment

This week is #SuicidePreventionWeek and it matters. Hope matters. You matter. The focus on loneliness, loss, depression, and mental illness isn’t what will help prevent suicide alone – the focus on people, connecting, sharing resources and hope is what makes the difference. Are you in?

At #hcldr we spend all of our time talking and listening to everyone we meet in healthcare and other fields. We see the opportunities to bring people together, listening to many points of view. After all, no one has all the answers. Sometimes, in the roar of all the talking, meeting, and sharing, we still miss the people suffering silently. I want to talk about that today.

Suicide and suffering in silence impact all types of people, without a doubt. Healthcare workers are especially vulnerable since they are often the folks others come to for help themselves. Where does that leave the nurse, social worker, or physician who is suffering? Not in a good place, let me tell you.

The recent loss of Saoirse Kennedy Hill is all the more poignant when we listen to her own words that she shared to help those in need. Some of her story is shared in “Listening to Saoirse Kennedy Hill,” by Elana Premack Sandler in Psychology Today. I recommend you take just a moment to read the entire article and note the intersection with healthcare.

If someone says they’re feeling depressed, a good way to respond would be, “What are some other things you’re feeling? What do you think has brought this on?

If you don’t feel comfortable saying either of those, say, “I don’t understand what you’re going through, but I am here for support.” Too often, people speak before they think, and that can damage the trust in a relationship.

If someone confides in you, try not to say, “It’s all in your mind,” or “lighten up,” or, my personal favorite, “Happiness is a choice.”

The statistics on physician suicide are frightening:Physicians are more than twice as likely to kill themselves as non-physicians (and female physicians three times more likely than their male counterparts).

Talking about the hidden epidemic is self-evidently difficult. Last year, Gabrielle Glaser wrote that at least 400 U.S. doctors kill themselves every year. In “American Doctors Are Killing Themselves and No One Is Talking About It” Gabrielle mentions another profound effect beyond the obvious and horrible personal loss to the victim and their loved ones:

Since the average annual caseload of most family doctors is roughly 2,300 patients, 400 physician deaths could mean that a million Americans lose their doctors to suicide each year.

We see the insidious and far-reaching losses that result from missing the signs, allowing those we love, respect, and work with to end their lives (or make the damaging attempts). In fact, we know that “allowing” isn’t the right word, but it gets the point across.

Physicians do acknowledge the trend and are not sitting idly by. Fresh examples are seen at Northwestern University‘s Feinberg School of Medicine and others. Alison Bowen of the Chicago Tribune discovered:

The medical profession is starting to recognize the problem of depression in its ranks.

Northwestern has a clinician available 24 hours a day, seven days a week, for any physician to confidentially call. In Boston, Brigham and Women’s Hospital’s Center for Professionalism and Peer Support offers myriad resources, such as clinicians who reach out to doctors after they’re involved in adverse events or have been named in a lawsuit, for example. And in Missouri, proposed legislation would establish a committee to study depression in the state’s medical schools.

Hopeful and positive in many ways.

I find much more information on physician depression and suicide vs nursing and other healthcare professions. We can be certain that these effects are impacting all areas of healthcare. Outreach, compassion, education on warning signs, and support are tools that, once taken to heart, allow us to help those around us personally and professionally.

Some ask why? In “Why are doctors plagued by depression and suicide? : A crisis comes into focus,” Judith Graham of STAT shares:

In another, more recent study, 29 percent of residents suffered from significant symptoms of depression. And those symptoms escalated within a year of starting training — a sign that residency programs themselves were contributing to the problem.

We see the culture of hard work, long hours, and competition to be a significant factor. This is beyond personal and family issues plus mental health history.

Warning signs? None are perfect indicators, but when taken together they form a pattern we must not ignore. Take a look at this graphic from Beyond Blue: 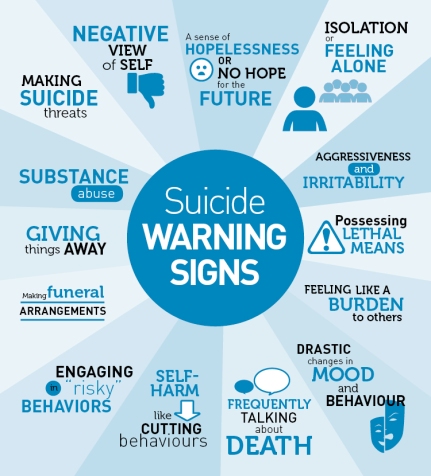 Let’s consider what we can do individually and as a #hcldr community of peers to change the course of the silent epidemic and make it silent no more. This is not the time for silence, this is the time to help those around us in need.

Please join us on Tuesday, September 10, 2019 at 8:30pm Eastern (for your local time click here) as we discuss the following topics:

“American Doctors Are Killing Themselves and No One Is Talking About It,” Gabrielle Glaser, Daily Beast, March 23, 2015. http://www.thedailybeast.com/articles/2015/03/23/american-doctors-are-killing-themselves-and-no-one-is-talking-about-it.html

“Why are doctors plagued by depression and suicide? A crisis comes into focus,” Judith Graham, STAT, July 21, 2016. https://www.statnews.com/2016/07/21/depression-suicide-physicians/

Photo by Lina Trochez on Unsplash